Due to the current COVID-19 crisis, all Greater Victoria school playgrounds are now CLOSED.  Signage has been installed. Currently, playfields remain open but we remind our community to please practice social distancing if visiting playfields.

Under the direction of the Provincial Health Officer, the Minister of Education has suspended in-class instruction in all schools until further notice. For more information and regular COVID-19 updates please visit: www.sd61.bc.ca 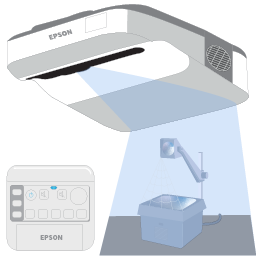 What is a TEC Package, I thought it was called an overhead projector?

TEC (Technology Enhanced Classroom) Packages are mounted projection units with audio systems and multiple inputs for connecting laptops, classroom desktops and mobile devices. There are several different configurations, depending on when and where the units were installed. Overhead projectors are those old things that you needed transparancies and non-permanent pens for. There may still be one or two in your building have been hoarded by an Art teacher. This guide will give general information about TEC packages, and aims to be applicable to many situations; however the GVSD Helpdesk can also be consulted to answer immediate issues with the TEC Package.

With a few exceptions, most of our TEC packages have a Control Box installed. Unlike the remote control unit the Control Box is not likely to get lost between the seat cushions, or under a stack of paper. Bonus: It also has big buttons and legible text. The diagram below outlines the function of each button (click on the image to see it enlarged).

The remote, should you happen to know where it is, offers the same great features of the Control Box but from farther away. It also offers the Freeze ability, which allows you to project a static static picture of the last thing you were showing while you set up the next thing you will present. 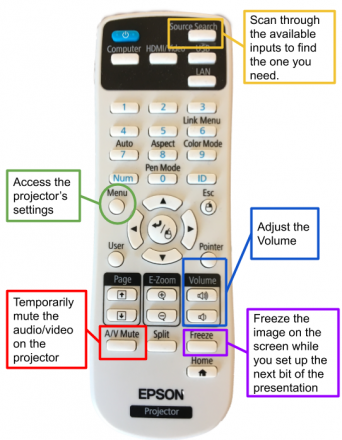 The Standard Remote for TEC Packages looks similar to this

Connecting Devices to the Projector

Most classrooms should have a standard HDMI cable for connecting Educator Laptops, Chromebooks and other devices— like DVD players—directly to the TEC Package. Select HDMI 1 as the source and plug in the device. If you see a blank desktop when you plug in the device, refer to the Um, I connected my computer… where’s the picture? discussion below.

Older Chromebooks have HDMI outputs for connecting to the TEC package, but the latest versions—currently being purchased by the district—do not. These computers use a newer technology called USB-C, which requires the purchase of an additional adapter to connect to existing HDMI cables, or a dedicated HDMI to USB-C cable. At present, the district does not have a large number of these adapters—however most schools should still have a supply of older Chromebooks with HDMI outputs. 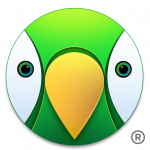 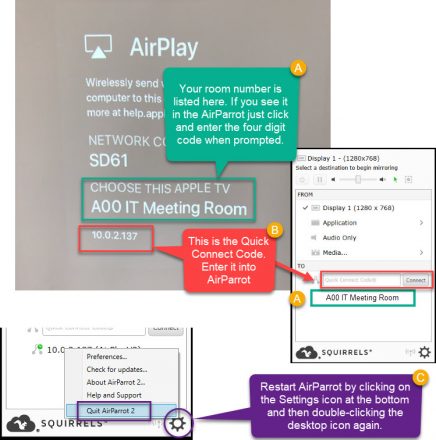 All district laptops should have AirParrot installed; some desktop computers have it as well. If your laptop does not have AirParrot it can be installed from Software Center. AirParrot connects a Windows computer’s display wirelessly to Apple TV devices. In the past the app launched at startup, but that setting was changed so that users must launch the app by double clicking the icon on the desktop. In a perfect world you will see the name of your classroom listed among the available Apple TV’s in AirParrot’s window at the bottom of your screen ( see bubble A). You click the name of your room, enter the four digit code on your screen and magic happens. Or does it?

AirParrot can be a naughty bird sometimes. Here are the most common issues reported:

AirParrot does not list your room: AirParrot should list all the available Apple TV’s in your school, but sometimes you can’t find yours on the list. You might be able to just enter the Quick Connect Code to get immediate access. The quick code is the IP address of the Apple TV, and it is often listed on the Apple TV’s default screen (bubble B in the image above). If it is not listed try restarting AirParrot (C) and restarting the Apple TV (D). If you still cannot connect please request assistance via a Help Desk ticket.

AirParrot is connected, but there is no sound (or sound/images is very fuzzy): Restarting the Apple TV  resolves this issue most of the time. Restarting is accomplished by pressing the Menu and Home (TV icon) buttons at the same time (D). Hold the buttons down for 5 seconds and watch the white LED on the front of the Apple TV box. When the white light begins to flash rapidly let go of the buttons. If the light does not start to flash, or if you get a message asking if you’d like to put Apple TV to sleep, let go of the buttons and press them down again for 5 seconds.

Did You Know: Your Apple TV remote needs to be charged occassionally, using the same cord that charges iPads/iPhones. If it’s not working it might need to be plugged in for 10 minutes or more. Learn how to charge the remote here. 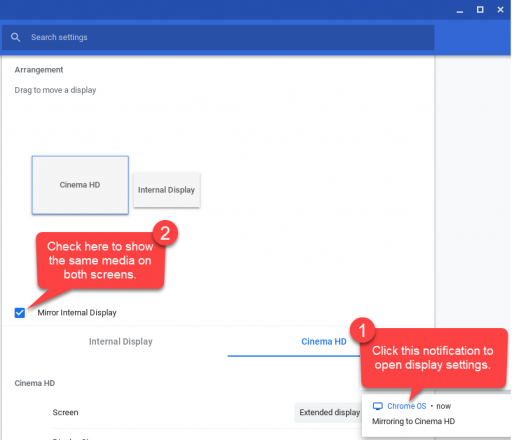 The easiest way to reach the Display settings on a Chromebook is to click on the notification box that appears in the lower right-hand corner of the screen when you make a new connection (1). When you are on the Display Settings page check the box that says Mirror Internal Display to show the same media on both screens (2).

If you don’t see the notification window when you plug in HDMI you can also find the display settings by following the instructions on the image below. 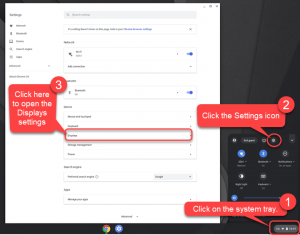 Switching Display Settings on a Mac

Open this image for instructions on accessing the display settings on a Mac.

Playing sound through the TEC Package with a blank screen

To play sound from any device with the projector off you will need to access the projector’s settings using the remote (or by touching buttons on the projector itself, which can get dicey if the projector is up high). The changes you make will be permanent, unless you change them back afterwards. To enable this feature do the following: 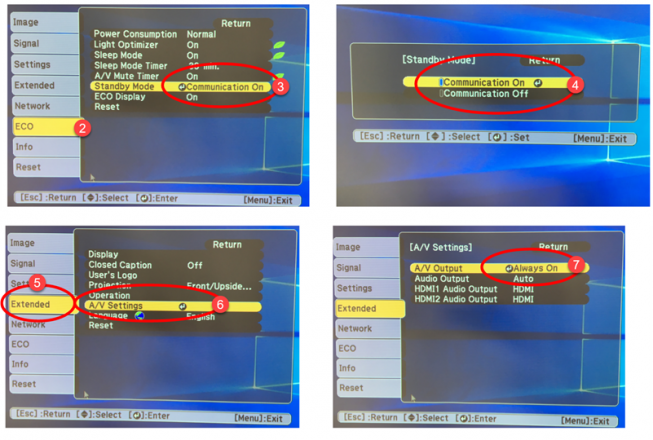 You can now play music/audio from any computer iPad/iPhone or other source; just remember to select the correct source (Computer 1, HDMI 1 or HDMI 2/Apple TV).